Self‐Portrait as a Drowned Man 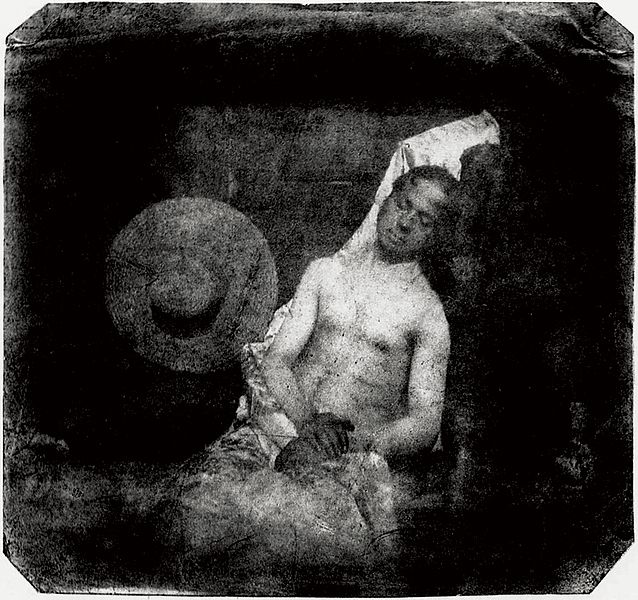 Self‐Portrait as a Drowned Man

Hippolyte Bayard (20 January 1801 – 14 May 1887) was a French photographer and pioneer in the history of photography. He invented his own process that produced direct positive paper prints in the camera and presented the world’s first public exhibition of photographs on 24 June 1839. He claimed to have invented photography earlier than Louis-Jacques Mandé Daguerre in France and William Henry Fox Talbot in England, the men traditionally credited with its invention.[1]

Bayard experimented with the new medium taking photos of plant specimens, statuary (including posing with them for self-portraits), street scenes, urban landscapes, architectural photos, and portraits. He photographed prominent figures and an ordinary worker. He also advocated combination printing and was one of the founders of a photo society.

While working as a civil servant, Bayard experimented with photography.[when?] He developed his own method of producing photos called the direct positive process.[when?] It involved exposing silver chloride paper to light, which turned the paper completely black. It was then soaked in potassium iodide before being exposed in a camera. After the exposure, it was washed in a bath of hyposulfite of soda and dried.[3]

The home where Hippolyte Bayard was born (Maison d’Hippolyte Bayard) at 4 Bayard place in Breteuil
The resulting image was a unique photograph that could not be reproduced. Because of the paper’s poor light sensitivity, an exposure of about twelve minutes was required, so that still-lives were favoured and human sitters were told to close their eyes to eliminate the eerie, “dead” quality produced by blinking and moving the eyes during a long exposure.

In the summer of 1851, along with photographers Édouard Baldus, Henri Le Secq, Gustave Le Gray, and O. Mestral, Bayard travelled throughout France to photograph architectural monuments at the request of the Commission des Monuments Historiques.