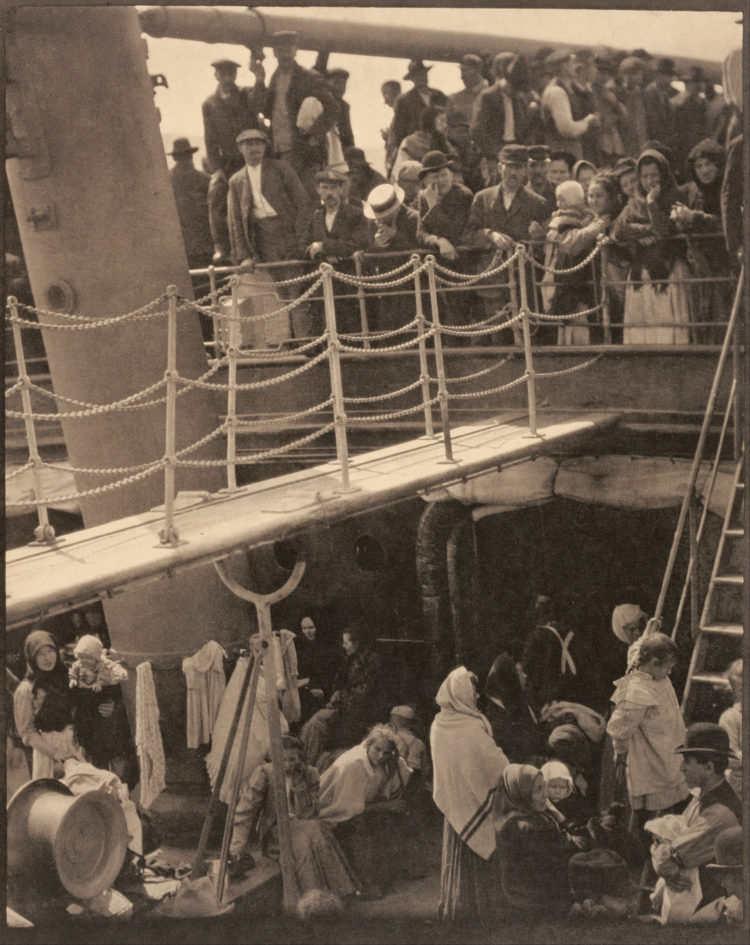 The Steerage is a black and white photograph taken by Alfred Stieglitz in 1907. It has been hailed as one of the greatest photographs of all time because it captures in a single image both a formative document of its time and one of the first works of artistic modernism.

To the left was an inclining funnel and from the upper steerage deck there was fastened a gangway bridge that was glistening in its freshly painted state. It was rather long, white, and during the trip remained untouched by anyone.

On the upper deck, looking over the railing, there was a young man with a straw hat. The shape of the hat was round. He was watching the men and women and children on the lower steerage deck…A round straw hat, the funnel leaning left, the stairway leaning right, the white drawbridge with its railing made of circular chains – white suspenders crossing on the back of a man in the steerage below, round shapes of iron machinery, a mast cutting into the sky, making a triangular shape…I saw shapes related to each other. I was inspired by a picture of shapes and underlying that the feeling I had about life.”

Although Stieglitz described “an inclining funnel” in the scene, photographs and models of the ship (see below) show that this object was actually a large mast to which booms were fastened for loading and unloading cargo. One of the booms is shown at the very top of the picture.

Much has been written about the scene as a cultural document of an important period when many immigrants were coming to America. In fact, the picture was taken on a cruise to Europe from America, and for that reason some critics have interpreted it as recording people who were turned away by U.S. Immigration officials and were forced to go back home. Although some of the passengers might have been turned back because of failure to meet financial or health requirements for entrance, it is more likely that most of them were various artisans who worked in the booming construction trade of the time. Workers who were highly skilled in crafts such as cabinet-making, woodworking and marble laying were granted two-year temporary visas to complete their jobs and then returned to their homelands when the work was complete.