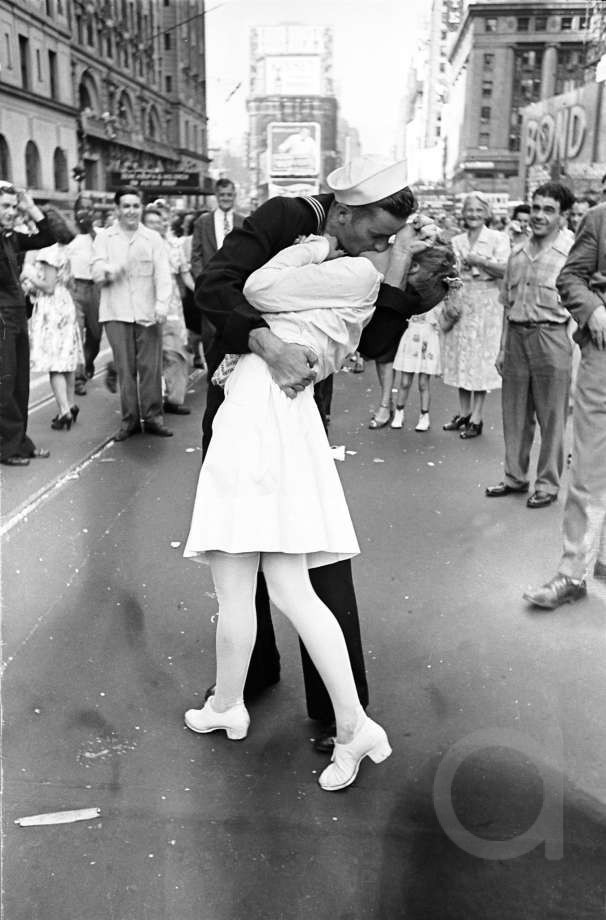 V-J Day in Times Square is a photograph by Alfred Eisenstaedt that portrays a U.S. Navy sailor embracing and kissing a total stranger—a dental assistant—on Victory over Japan Day (“V-J Day”) in New York City’s Times Square on August 14, 1945. The photograph was published a week later in Life magazine, among many photographs of celebrations around the United States that were presented in a 12-page section entitled “Victory Celebrations”. A two-page spread faces a montage of three similar photographs of celebrators in Washington, D.C., Kansas City, and Miami, opposite the Eisenstaedt photograph that was given a full-page display on the right hand side.

Eisenstaedt was photographing a spontaneous event that occurred in Times Square during keen public anticipation of the announcement of the end of the war with Japan (that would be made by U.S. President Harry S. Truman at seven o’clock). Eisenstaedt said that he did not have an opportunity to get the names and details, because he was photographing rapidly changing events during the celebrations. The photograph does not clearly show the face of either person involved, and numerous people have claimed to be the subjects. The photograph was shot just south of 45th Street looking north from a location where Broadway and Seventh Avenue converge. Donald W. Olson and his investigative team estimate that the photograph was taken at 5:51 p.m. ET. In their history pages, Life has noted that the Eisenstaedt photograph was taken with a Leica IIIa camera.